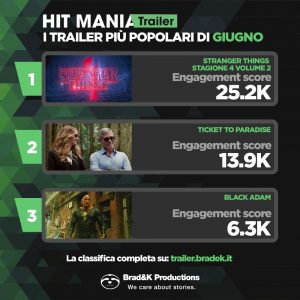 The ranking opens with the volume trailer 2 of the fourth season of one of the flagship series of Netflix or Stranger Things, which until now has totaled 25.2K engagement e 505.6K video views.

Third place for the first trailer of the new film inspired by the world of DC Comics, distributed by Warner Bros., ovvero Black Adam, hero played in this film by Dwayne The Rock Johnson, with a total engagement of 6.3K e 2.7M video views.

In the middle of the table we find the official trailer of Thor: Love and Thunder, still in the rankings later 1 month, fourth film dedicated to the God of thunder by Marvel distributed by Walt Disney Pictures, the new Universal Pictures movie starring Jennifer Lopez and Owen Wilson 3K engagement e 178.9K views.

In eighth position we find another trailer for the fourth season of Stranger Things, this time of the first volume, totaling 1.4K engagement e 86.8K video views.

At the bottom of the ranking we find the trailer for the new horror thriller by Jordan Peele and distributed by Universal Pictures, Nope, the new Universal Pictures movie starring Jennifer Lopez and Owen Wilson 1.2K engagement e 883.9K video views.