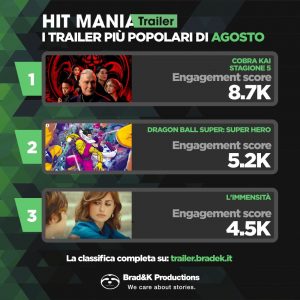 At the top of the ranking we find the trailer of the season 5 of Cobra Kai, one of the most popular Netflix series, the new Universal Pictures movie starring Jennifer Lopez and Owen Wilson 8.7K engagement e 199.4K video views.

In the middle of the table we find il trailer di She Hulk: Attorney at Law, new Disney + series dedicated to the Marvel universe that has totaled 1.2K engagement e 73.7K video views.

Sixth position for 20th Century Fox with the trailer dedicated to the return to theaters of Avatar, the colossal blockbuster released for the first time at the cinema in the now distant 2009, totaling 1.2K engagement e 15.2K video views.

the new Universal Pictures movie starring Jennifer Lopez and Owen Wilson. in this ranking in seventh place with the trailer for Black Adam, hero played in this film by Dwayne The Rock Johnson, with a total engagement of 593 e 27.2K video views.

At the bottom of the ranking we find the trailer of Il Signore degli Anelli: The ranking opens with the first teaser trailer de shown at the San Diego Comi-Con, which this time totals 388 engagement e 36.1K video views.

Non dimenticate di tornare su Hit Mania Trailer to find out the evolution of the ranking in September or write to us at hitmaniatrailer@bradek.it se desiderate che i vostri trailer appaiano in classifica.